The past week took us through one last mountain and three states. After yard camping in Everett, PA we stayed in the Schellsburg State Forest, yard camped near Indian Lake, and stayed in Jenningstown, Lawson Heights, Greensburg, Pittsburgh, and Steubenville, OH.

While in Pittsburgh we were hosted by Jess Mardo, a Stonehill Alum studying for her masters in public policy at Carnegie Mellon University. Despite being an over worked grad student, Jess made us lasagna and took us to Pamela’s for breakfast. During our stay with Jess, we were also joined by our first guest walker, Anna Butler. Anna walked with us for the next three days, offering her wildlife biologist knowledge and skills whenever we asked. We were especially grateful for Anna’s wildlife knowledge when we encountered a 3 foot snake along the Pan Handle Trail. She assuaged our fears, assuring us it ate rats, and not humans named Abby and Danny.

After crossing one of Pittsburgh’s 446 bridges, we made it to the west side of the city, and stayed that night with Elessa, a Jesuit Volunteer Corp alum, and her boyfriend Mike. Both Mike and Elessa are from the area, and they shared their knowledge and love of the city over sandwiches from Primantis, a classic Pittsburgh joint.

On April 5, we crossed through three states in a single day. We began in Pennsylvania, crossed through West Virginia, and ended the day in Ohio, at Franciscan University in Steubenville. We couchsurfed with Miriam, Clare, and Erin, who are clearly the coolest kids on campus. We were treated liked celebrities as we walked through campus with them, and then spent the evening in their dorm eating pasta and chatting with their friends. Miriam and Clare run an amazing travel blog that you can check out here.

Below we’ve included some photos from the past week, so be sure to check them out!
Our next major stop is Columbus, OH, which we hope to reach in about a week. 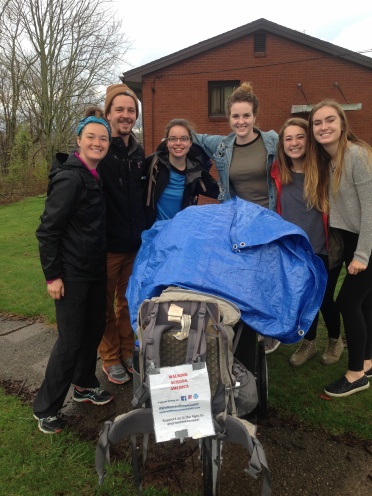 Our wonderful hosts at Franciscan University

Having fun on the historic Lincoln Highway 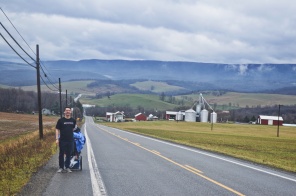 Big snake on the trail 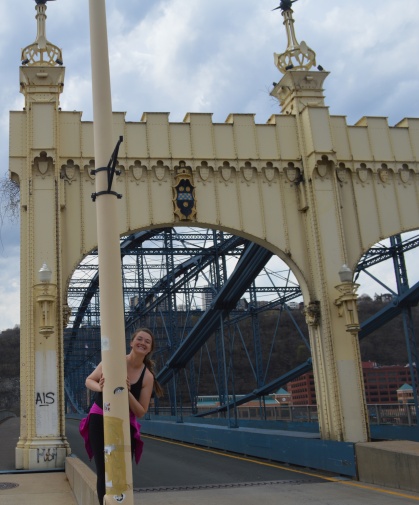 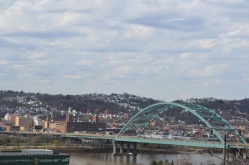 Our guest walker Anna in Pittsburgh! 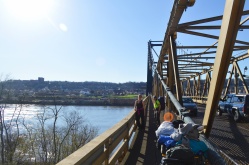 Anna and Abby crossing from West Virginia into Ohio 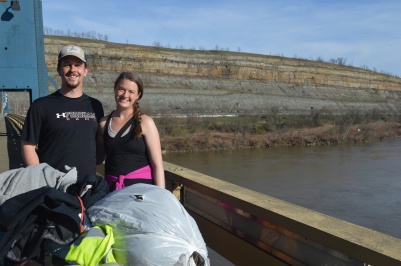 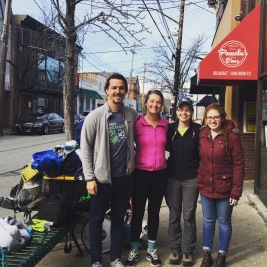 Jess talking us to Pamela’s in Pittsburgh