There’s been more difficult terrain. There will be less traveled roads. But the five days between Green River and Salina, Utah were what we expect to be the hardest stretch of our trip. 110 miles. 110 miles with no access to food, running water or gas stations. It was a 110 mile odyssey in the midst of our 3,200 mile walk. For many, that two hour drive between Green River and Salina can feel long, vacant and expansive. For us, it was a daunting challenge indicative of the last third of our trip through Nevada, and another reminder of the natural beauty of this country, and the incredible kindness of the strangers that populate it.

Water would be our biggest challenge for this trek. There were no gas stations, houses, or even streams along the way, and we would not be able to carry enough with us for the 5-6 days. In preparation for this, we found Americorps volunteers in Green River who generously offered to drop off water every 20 miles along the way on their drive out to a national park. However, even with careful preparation, things did not go as planned.

We arrived at the first rest stop at the San Rafael Swell outside of Green River at noon on our first day of walking. We dropped our gear, grabbed our food and water, and found the only shade in the area. Directly outside the outhouse. Not the best smelling place to sit by. We sat in the shade for the next five hours, awkwardly greeting every incoming tourist looking to tinkle with a grin and an explanation of why we were sitting where we were. Countless strangers gave us water, food and Gatorade. When we finally got to where our first water drop-off was, we were nervous to find that one of the two gallons we had requested was missing. Luckily, with all of the water we’d received at the rest stop earlier, we felt confident we would be okay.

We arrived at our second water drop at the Ghost Rock viewpoint and were a little worried again to find two gallons instead of three. With our extra supply from the day before, however, we again figured we would make it until the next drop. While setting up our tents on behind Ghost Rock on the side of the road, we were surprised to find someone already camped out; usually we are the only ones setting up on the side of the highway in the middle of nowhere. A man in his late thirties wearing a tye-dye shirt and flip flops emerged, equally surprised to see us. He told us he was doing a fast in the desert and had been camping throughout Utah during it. He asked us if we needed anything and gave us a friendly honk and wave when he passed us on the highway the next day. In the morning as we left, we met a man dropping his kids off at summer camp. He lived north of the area and left us with his phone number to contact him if we needed anything or had anymore trouble with water.

By day three, the 110 mile trek between services began to feel like a blur. It was our hottest day yet, and, although we were surrounded by beautiful Utah scenery, the long stretches of highway had begun blending together. It wasn’t until we reached our rest stop for the day that things came into focus. We climbed the hill up to the viewpoint of the Salt Wash, excited to use restrooms and for the water that awaited us. Again though, our water needs were not to be met. Someone had taken the two gallons the Americorps volunteers left for us, and, although we knew we could ask people for water, we were worried about dehydrating. Fortunately, as continually seems to happen on this trip, we met countless kind strangers, willing to assist us in any way they could. We met an older Canadian couple, motorcycling across the United States to visit America’s National Parks, who filled our waters and offered us trail mix. We met a group of people who were traveling with a local youth group, who gave us plenty of chips and cookies, and a massive watermelon that we ate with our pocket knife. We met a young man named Austin from upstate New York, who stopped and talked with us about our journey, took a portrait of us, and left us with a jug of water and two bananas. We met a Costa Rican man named Luis, who was traveling to Las Vegas with his family in an RV. We conversed in the little English he spoke, and the little Spanish we spoke, and he left with a promise to host us if we ever visited Costa Rica. We were feeling down and anxious about our water needs when we arrived at the rest stop. By the time we left, we’d made friends with more strangers on the side of the road, we had received enough food and water to last us the rest of our trip, and we had high spirits carrying us into the last two days of our trek. 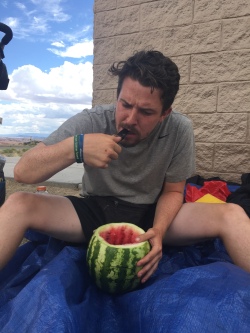 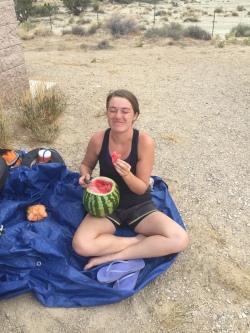 On our fourth day we reached a rest stop with running water, drinking fountains, and covered picnic tables. It felt like a palace. We met a family who was on their own road-trip adventure. They had stopped to make lunch and gave us cheesy bacon mashed potatoes, glasses of moscato and asked to take pictures with us.  With our bellies full and our bodies rested, we started our late afternoon walking in the rain and with the temperature dropping. That night, we rushed to set up our tents in the cold rain and howling winds. We had twenty six miles until Salina, and we decided to push ourselves the next day, in order to reach town, and finish this part of our journey. Despite switching to the unpaved, dirt frontage road, two encounters with flooded underpasses, and one massive uphill, we reached our destination safely. All we had left to do was stock up on Gatorade, coconut water, beer and Mexican food, to ensure we enjoyed our short stay at the Super 8 in Salina, Utah. 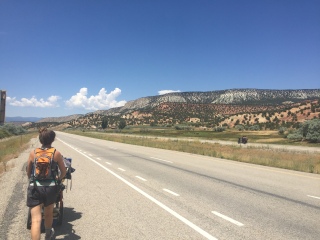